Skip to content
Home » Blog » Items » The Lighthouse of Nieuw-Haamstede

This is probably the most famous lighthouse in Holland. The recognizable building at the tip of the Island Schouwen-Duiveland is the Westerlichttoren (Western-light tower) (also known as West Schouwen). This tower is situated in Nieuw-Haamstede and built between 1837 and 1840 by L. Valk. 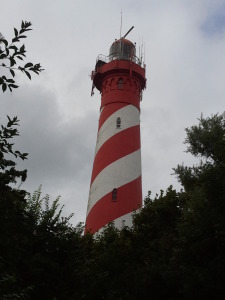 … the lighthouse glows at 58 meters above sea-level?

… the tower has been painted in a red-and-white spiral because it would be easier recognizable by planes that land at Haamstede Airport?

… the walls are 2,5 meters thick at the bottom, tapering upward?

… the bulb in the tower is switched on and off automatically by a light sensor?

… the lighthouse stairs have 226 steps to the top?

… before the euro was introduced in 2002, the lighthouse used to be pictured on a 250 guilder banknote?

Unfortunately, the lighthouse is not freely accessible. However, a visit to check out the exterior of the monument is highly recommended. It’s always impressive to see the tower from up close. Don’t forget to look at the beautiful Gothic featured houses surrounding the lighthouse as well.